Clever communicating required to be heard at crowded COP26 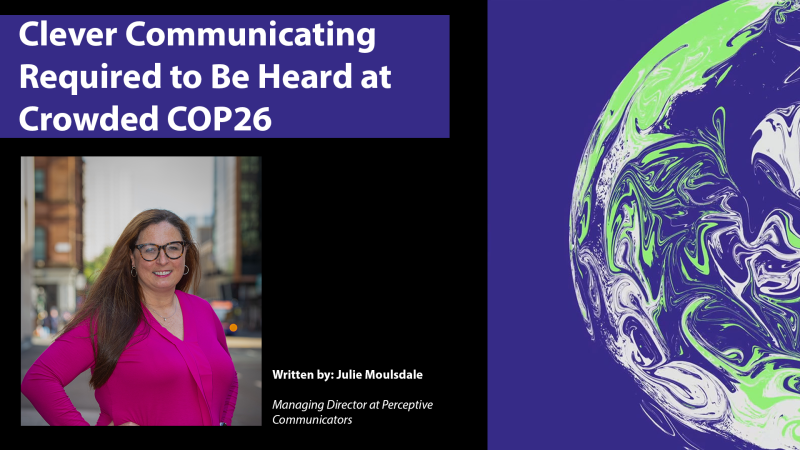 The great and the good descending on Glasgow brings disruption not only to our city and traffic system, but also to the news agenda.  The time immediately before and during the event will be a very crowded market, where even the most important announcements risk being drowned out.   The UN’s climate change conference will feature heavily in news bulletins for the full 12 days, but any other news is most likely to be overlooked at the beginning of the event when world leaders arrive, as well as the final days when any deals are announced.

Print, broadcast and online publications will likely be focussed on the event, but social media offers a space for companies and individuals to tell their stories. It also allows for collaboration with others to amplify the message. The official hashtags for the event are #COP26 and #ClimateAction and give organisations a unique opportunity to join a worldwide conversation on climate change. While tempting to use such hashtags as a platform, do ensure that the content is relevant and the hashtag is not being hijacked!  Sounds obvious, but numerous brands from Habitat to Waitrose have fallen foul of this. Even BBC personality and Strictly star Dan Walker got into a tangle on Twitter about a hashtag related to the Chester Literature Festival.

Climate change is higher on the agenda than ever before and having such a significant environmental event on our doorstep makes it tempting to jump on that sustainability bandwagon.   Before making the leap it would be wise to reflect to ensure that your sustainable credentials stand up to scrutiny. At Perceptive we have made several significant positive steps in relation to sustainability. For example, all company cars are either fully electric or a hybrid and have been for the last five years. We have installed a special boiling and cold water tap to reduce energy consumption and single use plastics. We’ve taken numerous other measures, but we recognise we still have some way to go, so are cautious about making too many sweeping claims about sustainability.

In the last few weeks the Competition and Markets Authority published its Green Claims Code. The UK government body warns they are “concerned that too many businesses are falsely taking credit for being green, while genuinely eco-friendly firms don’t get the recognition they deserve”. Companies have until the end of the year to stop so-called greenwashing. This is a warning worth heeding for communicating new sustainability policies. Now is not the time for pithy announcements that could be seen as simply greenwashing.

While COP26 is an important point in time, consider before, during and after rather than just the during conference itself. The forensic focus of the deals (hopefully) agreed in Glasgow begins as soon as Air Force One departs Scotland. This provides a great chance for organisations to demonstrate work they are already doing, or can commit to doing, that matches with what is in the legally binding international treaty. Expect any “Glasgow Agreement” to continue being consistently discussed over the coming years; much in the same way the Kyoto Protocol was and the Paris Agreement continues to do.

If we can learn anything from the spirit of COP26, it is that by working together we can be more effective. That includes collaborating on communications to help amplify your message.

Julie Moulsdale is the managing director of Perceptive Communicators which specialises helping organisations in the built environment, health and economic development transform lives and futures through better communications