Dark Social: What Every PR Professional Needs to Know 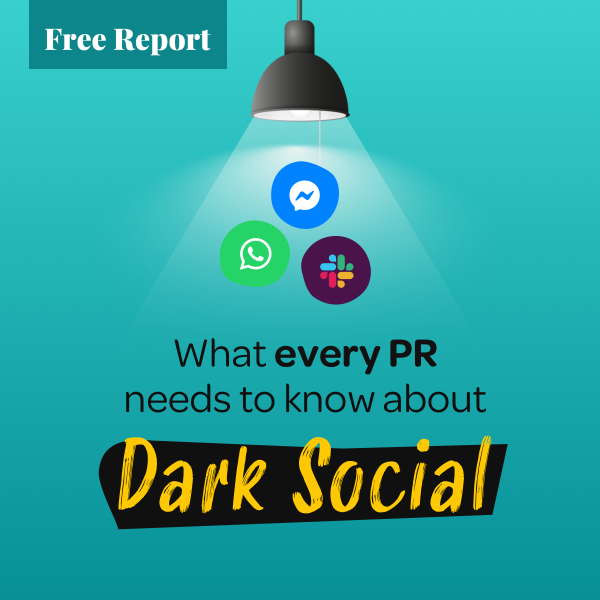 Dark social. Never heard of it? You are not alone! However, research shows that most of the content generated by the PR industry is being shared and talked about within dark social channels. We just can’t see it.

So let’s find out what dark social is and why it’s so important to modern day public relations.

What is dark social?

According to eMarketer, there will be 3.09 billion monthly messaging app users worldwide in 2021, up by 6.1% year over year. They also predict that more than three-quarters of internet users worldwide will use a messaging app monthly by 2024. Meanwhile, research from GWI shows that Whatsapp is now the world’s favorite social media platform. Other dark social channels feature heavily in the top ten.

Traditionally, dark social channels have offered greater personal privacy and control. Messages are encrypted. Advertisers are not given access to data. Here, trust is vital and mistakes are punished. The Guardian noted that ‘A poorly explained update to its terms of service has pushed WhatsApp users to adopt alternative services such as Signal and Telegram in their millions.’

The scale of activity that is taking place behind closed doors is staggering.  According to RadiumOne, a whopping 84% of content shares take place on dark social platforms. The implications for the PR and social media industry become clear when examining the types of content being shared: links to news stories, websites, blogs and products all feature heavily. Much of this content represents the bread and butter of the PR industry. In many cases, users are discovering news stories on open social platforms, then pulling them into private networks where true feelings can be discussed.

The opportunity for the PR industry

Professional communicators have long accepted that the appearance of media coverage is merely the beginning of a story, not the end. PRs have become adept at tracking its reaction across social media, under the impression that they’re seeing the full picture.

As we have shown, this is far from the case.

It may be the case that a majority of the action is happening out of view. In fact, some of the stories that have seemingly failed to get traction may have gone viral amongst niche groups of highly engaged peers. We’ve also seen that there’s likely to be a significant discrepancy between the sentiment of public vs private conversations.

But the opportunity this presents is potentially huge.

The PR industry is built on the concept that editorial is more influential and consequential than advertising. We can assume that, when friends share curated stories with one another in a safe environment, the impact is greater still. The understanding anxieties of younger audiences in particular should increase the usage of dark social for years to come.

The Barcelona Principles 3.0 encourage communicators to focus on the business outcomes and impacts of their work. Given its unparalleled potential to spark engagement and drive action, the role of dark social clearly cannot be underestimated.

At Releasd, we have attempted to measure the unmeasurable. Our PR reporting tool now includes metrics that estimate how much activity is taking place for a given story within dark social channels. To learn more about dark social and how we measure it, download the free Primer: What every PR needs to know about Dark Social.