February was UK LGBT+ History Month. We heard many inspiring untold stories that gave us both reasons to celebrate the LGBTQ+ community, and reasons to keep the conversation going past the month of February.

We were reminded of the obstacles and struggles that many brave LGBTQ+ people face, and still face today, to pave an easier life for future generations. Without them, many of our lives could have looked very different. We certainly wouldn’t have been able to write this article — or carry out the work we are doing.

Our 2021 LGBTQ+ workplace advocacy report—in partnership with YouGov—showed that even though we have come a long way, 29% of survey respondents were not aware of any LGBTQ+ colleagues holding senior leadership positions.

We know that representation can directly impact a person’s sense of belonging, especially in the workplace, which is why we want to use this platform to shine a light on some of the incredible LGBTQ+ people that make us and our industry proud. So without further ado, we are excited and delighted to introduce our first PRCA LGBTQ+ Role Model: 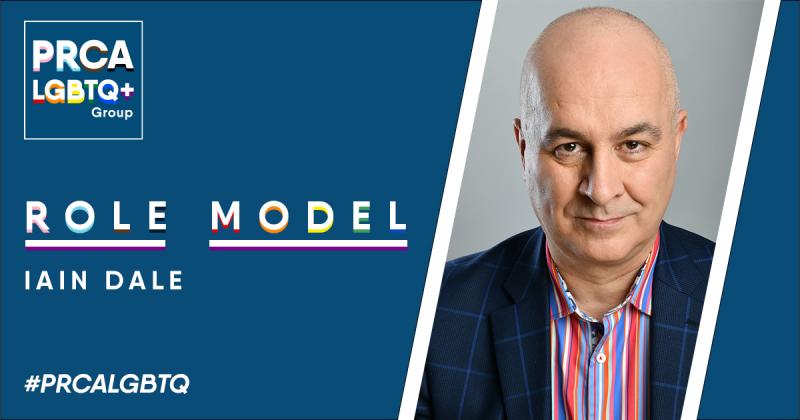 Iain Dale is an LBC radio host, political commentator and author of over 40 books including Why Can’t We All Just Get Along? He has been with his partner for over 25 years — since before he came out publicly at the age of 40. He sees this relationship as his greatest achievement in life. Yet legal union was held in limbo until the lagging law started to catch up with human feeling first in the Civil Partnership Act 2004, and then the Same Sex Couples Act 2013, both of which Dale and his now-husband embraced, committing to a civil partnership that was converted into a marriage in 2015.

Passionate, dedicated and clear-headed, Dale was set for success in both private and public spheres, yet faced equal obstacles in both. As a lobbyist in the late 1980s, campaigning ardently and successfully for the abolition of the Dock Labour Scheme, enabling moribund port development and thousands of jobs to be created, Dale was the first-ever Conservative to be selected, having openly told the selection committee he is gay. The inevitable notoriety of being a ‘first’—especially in north Norfolk in 2003—created a positive role model and inspiration for young LGBT politicians on the rise, but didn’t help Dale’s immediate campaign.

Dale told us: "When I was selected for North Norfolk in 2003, a few days afterwards I was at the Conservative Party conference in Blackpool. A young guy came up to me and said: “ I just what to say thank you.” “What for?” I asked, a little nonplussed. “Because you’ve made it easier for my generation.” I must admit, I welled up. I hadn’t realised the significance of what I had done until that moment. 18 years on I think he was right. There are now more than 60 openly gay MPs now. It is no longer a bar to selection in any party. And if I played a small role in enabling that to happen, I am very happy."

Dale’s bold and brave decision almost 20 years ago to show up as himself provided a legacy with a momentum, that once catalysed, could not be reversed.

Now, a radio host at LBC for over 11 years, Dale has a job he loves and excels at, a job he may never have found without social norms spinning his early political plans on their axis. In the sliding doors reality in which he found himself in parliament, the pleasure and ability to inspire from a position of public prominence may not have been as great. He believes the media and communications sectors are probably the most inclusive of all sectors in our society and economy. Which isn’t to say that we’re without room for improvement.

For further progress, he sees it as the duty of those in leadership positions to lead by example. Dale does just that on a daily basis, from his accessible and inclusive style on his radio show, to his transparency about his own happy life as a gay man and even standing up to be counted as a victim of a traumatic sexual assault in his late 20s.

The example Dale sets isn’t easy, but it is so very important and for those of us who look on, an inspiring encouragement to be ourselves, and proudly so.

, Co-chairs of the PRCA LGBTQ+ Group