Speaking up for PR Ethics 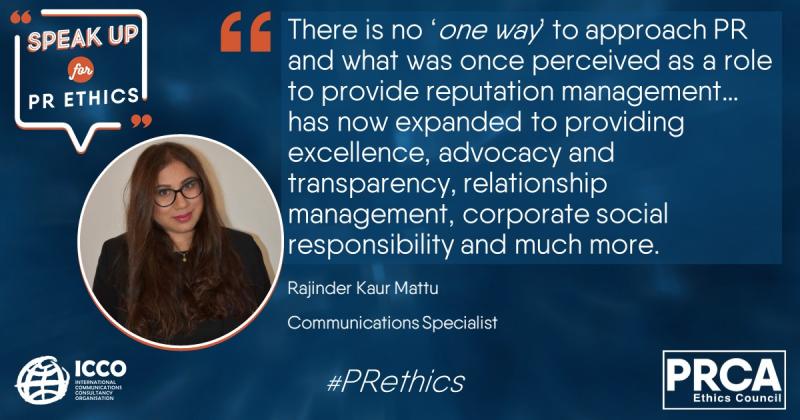 This September #PRethics Month is challenging the global industry to speak up for PR ethics.

The annual campaign launched by the Public Relations and Communications Association (PRCA) Ethics Council and the International Communications Consultancy Organisation (ICCO), places ethical behaviour at the heart of the public relations agenda.

This would go a long way in providing a united front against critics who argue that ethics in PR are unenforceable and provide obstacles to gaining credibility and professional status for the industry (Pieczka and L’Etang).

It would also go a long way in silencing critics who say the PR industry has not yet earned the same professional status and credibility as law and medicine. They attribute this to the fact that PR practitioners are not expected to register with licensed governing bodies, or sign-up to a consensual code of ethics, and professional values and norms.

They say that following an industry approved code of ethics and showing a commitment to serve the public interest through social responsibility, accountability and transparency will give PR practitioners greater autonomy to make communication-related decisions within their organisations (Heath; Sriramesh and Hornaman).

The PRCA Ethics Council says it is committed to doing just that. In a joint campaign it has combined its resources with the Ethics and Compliance Initiative (ECI) to launch a new research project to capture the global status of ethics and compliance in PR and communication. You can find out more about the partnership and research here.

Earlier this year, the PRCA Ethics Council also published its inaugural Annual Perspective 2021 report to draw attention to the pressing ethical challenges faced by PR professionals. The purpose of the report was to spur more meaningful dialogue about ethics in PR and assess what impact this would have on the future of the profession.

Findings revealed that there is no shortage of ethical challenges facing communicators right now. And given the times that we live in (post-pandemic, post-Brexit, the rise in fake news, more credence given to social media influencers and social justice warriors by national media), there’s an even greater need for PR professionals to firmly establish themselves as professional communicators.

Those who led on the report said a renewed sense of ethics must be placed at the forefront of the PR profession.

For PR practitioners like myself, this means being more open to adopt industry approved PR ethical frameworks; becoming a member of a PR professional body such as the PRCA or Chartered Institute of Public Relations (CIPR); communicating information that is reliable and from credible sources; and debunking misinformation and disinformation (counteracting fake news and propaganda).

And being an important part of a movement to improve diversity and inclusion among PR practitioners and change an industry that is mostly represented by those from a white middle-class and/or white public-school background. Studies have shown that having PR people from a wider range of backgrounds ensures that campaigns are handled with more integrity and care, and it enhances the quality and scope of the work.

It means managing the reputation of the PR industry and allowing people who understand very little about the profession to see the value of PR input.

According to a recent report published by the Professional Associations Research Network (PARN) – the PR industry was considered to be ‘more transparent than any other profession and at the same time the ‘least trustworthy profession’ (prone to communicating ‘biased’ and ‘misleading’ information).

Seriously, who can blame the public for understanding so little about the PR industry when scholars and PR people themselves struggle to define what PR is and whether it is in fact a profession?

All the fictional PR people are competent in their roles and often get the results they desire, but are sorely lacking in any moral fibre, personal integrity, or ethics.

The PR profession recognises that establishing a code of ethics is important. However not all PR professionals agree on what those ethics are.

In a memorable debate on PR ethics run by the University of Westminster in 2007, publicist Max Clifford said PR professionals have a primary duty to their clients and not the truth. He insisted that lying was sometimes necessary to achieve the greater good (PR Week, 21 February 2007). Although Max Clifford won the debate at the time, in the long-term (looking back at his career) his attitude lacked career longevity.

In his article #PowerofEthics: Embracing Ethics Month, David Gallagher, former Co-Chair of the PRCA Ethics Council, wrote that by far, the majority of PR practitioners recognise the professional need to deliver advice and a service that is both useful and ethical. But the world continues to change blurring lines that were once clear and pushing boundaries that were once fixed.

He said virtually every issue on a global stage today is now seen as a ‘PR battle’ with multiple sides competing for attention and influence. He says these very confrontations, characterised by hacking and leaks, alternative facts and fake news, bots and trolls, rarely reflect well on PR professionals.

In conclusion, there is no ‘one way’ to approach PR and what was once perceived as a role to provide reputation management to people or organisations has now expanded to providing excellence, advocacy and transparency, relationship management, corporate social responsibility and much more. I believe that having standardised PR ethics and codes of conduct will go a long way in providing a long-term future for the industry and raise professional standards. This can only be achieved if more people are willing to speak up about what matters most to them.