The Down Under Rainbow Jersey Controversy – Genuine or Pinkwash? 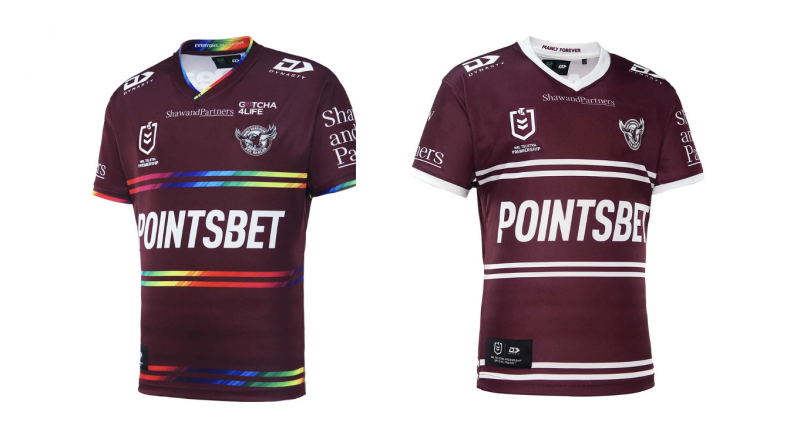 How can you muck up a Pride campaign?  This honour goes to the Manly Sea Eagles of the National Rugby League (NRL) in Australia.

The Sea Eagles had the bright idea to be the first NRL team to don a pride jersey, replacing its traditional four thin white stripes with rainbow ones. The problem? Huge resistance amongst the team’s actual players, with seven players refusing to play in the rainbow kit. The rebels are refusing on religious grounds, and say they were not consulted before the decision was made. It should be noted that these players are comfortable playing in a jersey sponsored by a gambling company and brewery. Go figure.

Also ‘go figure’ that two celebrity supporters of the team - Hugh Jackman and Chris Hemsworth - were given the special jersey before the players knew about them.

This campaign has more holes than a wheel of Swiss cheese.  Firstly, it was clear that the club had no genuine purpose other than to sell jerseys and jump on a bandwagon that clubs from other sports had already initiated.  Success on the merchandise front: They all sold out quickly. But there was no call to action, or any messaging to tell people why the club was taking this initiative. Forget about longevity or legacy - this was as shallow as a puddle, and many, including myself, would label this as classic pinkwashing.

It also neglected to leverage Ian Roberts, a Manly player in the 1990s who was the first NRL player to come out as gay – indeed the first Australian athlete. To this day, he remains the only male rugby league player who is out..

And vitally, it did not acknowledge its fan base, many of whom will be members of the LGBQ+ community.

So instead of backing themselves and the campaign, the Sea Eagles rolled out coach Des Hasler and captain Daly Cherry-Evans to face the media and apologise for the club’s “significant mistake.”  They didn’t quite support the protesting players, but they totally ignored the very people that the Pride campaign was aimed at. This was a big mistake and a fundamental PR mistake.

So what are the lessons?

1/ Better communications. As ever, when putting an ESG (Environmental, Social, and Governance) campaign together, all stakeholders need to be engaged.  There was no point in sending jerseys to celebrities to make sure they love the jersey while leaving the actual players in the dark.

It should not have been a surprise to anyone in the NRL that a pride message might prove problematic with players – the code has gone through years of controversy concerning Israel Folau, a brilliant but homophobic player.

2/ Think long term. Pride, like many other social movements, is all about change. Changing language, changing attitudes and building awareness and normality. This had none of it – it had the stink of “pinkwashing.”

3/ Stand strong. The management of Manly presumably wanted to join (or even lead) on a pride message. But once there was some backlash, they quickly backtracked.  They needed to stand strong and even call out the 'rebels.' After all, players are employees and they need to accept the strong principles of Pride in their workplace - especially given that they are role models in their community.  Not everyone is going to accept change, but the moral compass points in the other direction.

At the end of the day, a campaign that could have succeeded has just managed to alienate almost everyone from the Sea Eagles brand.

The only good to come of this is that it highlighted how much work is needed to be done by Manly, the NRL and in fact some fragments of the community to change attitudes and understanding.