New PR Research: Getting Coverage in 2020

As PR professionals for a long time our strategies and campaigns had to be based on ‘gut feel’ as to what will resonate with journalists and our audiences as opposed to having any hard data to point us in the right direction.

However, PR tool BuzzStream wanted to help to change that with their latest research piece as explained by Stephen Panico, Chief Growth Officer at BuzzStream: "We’ve known for a long time that the best performing teams get outstanding results by tailoring their pitches and content to the journalists they want coverage from. However, it’s always been frustrating for people who hear this advice because it’s always seemed to be more of an art than a science, something that a team either has or they don’t. We wanted to go beyond anecdotal evidence and platitudes and figure out exactly what the data actually says about what works and what doesn’t - based on what’s actually getting published. Now admittedly you can’t remove all of the personal skill from outreach, but this study will give much more clarity on what journalists in a given publication or vertical actually want."

The study itself took five verticals; Tech, Travel, Health, Entertainment and Personal Finance and analysed the most recent and most shared 1,000 articles from 20 publishers within each vertical; from the Guardian to the New York Times to Bustle. From this they have drawn insights on what, when and who to pitch journalists from each vertical and publisher, we’ve picked some highlights below.

Analysis of the most-used words in headlines and articles descriptions revealed the most covered formats for each vertical overall and for each publisher in each vertical. Looking at this top-line across all verticals we see that different formats prove popular in each vertical.

The research also looked at which days of the week saw the most articles published in each vertical to see if conclusions could be drawn on the age-old ‘best day to pitch’. The results show an even spread of articles being published on weekdays across all verticals, however, some interesting data can be seen on a publisher level both in terms of the number of articles being published per day and the days which they publish the most and least.

For example, looking at travel we see a huge difference between the average number of articles per day National Geographic publishes per day (2) vs Lonely Planet (34). We also see that the Daily Mail bucks the trend on the day articles are published with them publishing 28% of their articles on a Saturday compared to an average of 8% across the other 19 publishers. 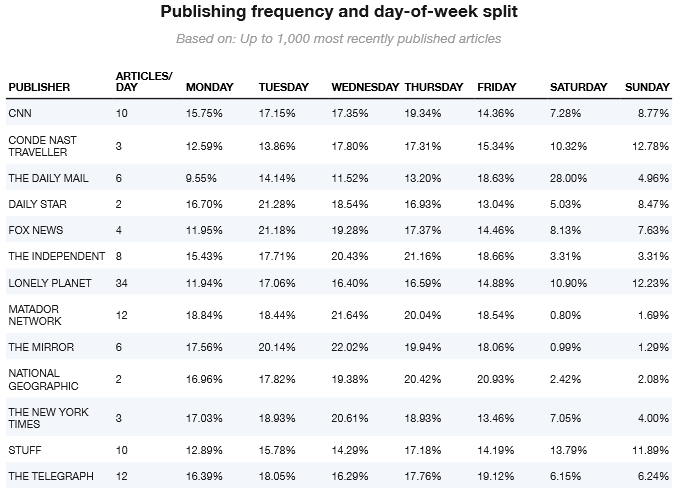 When it comes to who you should be pitching stories about the research also shows some interesting findings.

For example within Tech, Apple and Google are the most written about companies, with Elon Musk the most-written about individual. In Entertainment we see Netflix take the lead in terms of networks/streaming services and Avengers take the top-spot as them most talked-about film/franchise.

You can download the full report free at BuzzStream’s website to see all of the insights divided by vertical as well as some cross-vertical comparisons.