Complex PR – it’s all about visualisation

As a PR agency that specialises in complex, data-led topics from health to enterprise, we’re no strangers to a spreadsheet chock-full of figures.

But let’s be honest – a slew of numbers doesn’t always make for the most scintillating story. Bombard your audience with too many digits and you may find you lose them – and that includes the journalists you’re trying to pitch your idea to.

So how can you help your reader get their head around the data quickly and find the nub of the story?

It often comes down to visualisation. This can take many forms, but in essence it’s about taking the data and representing it in a way that aids understanding.

Recently, we launched a report on high growth firms for our client the Enterprise Research Centre. Their research examined the growth in the number of such firms (defined by the OECD as having 10+ employees and growing at an average annual rate of 20% over three years), showing that their numbers had reached their highest level since the early 2000s.

Starting with just the raw data, here are 5 steps we took to bring the story to life:

With the data spanning the entire period from 1998 to 2015, there were all manner of graphs you could create. However, we decided to focus in on the key timeframe : the period since the recession of 2008/9. It was this period that told one of the more surprising sub-stories hidden in the data – that much of the increase in high growth firms had been happening in the nations and regions of the UK rather than in London. Furthermore, there were certain ‘star performers’, including places not always associated in the media with economic dynamism such as Liverpool, Leeds and Southampton. This allowed us to produce simplified graphs that clearly demonstrated the central message we were trying to project. 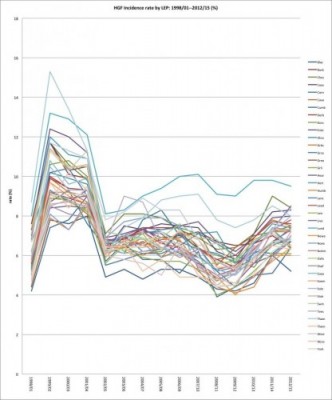 (b) Our simplified graph 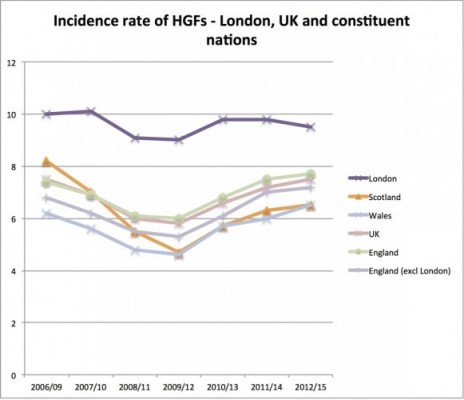 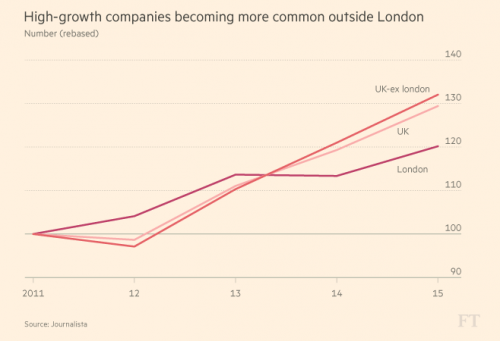 With the FT’s interpretation of the data

Everyone loves a good map, don’t they? In fact, where data lends itself to producing one, this ought to be considered essential. Again, there were many different ways we could have cooked this, but we went for an easy-to-understand version showing the ‘top 10’ and ‘bottom 10’ regions for the percentage of high growth firms.

We were thrilled when this map was turned into ‘own-brand’ versions by the clever graphics folks at both the Financial Timesand The Times – both of them crediting us/ERC as the source. 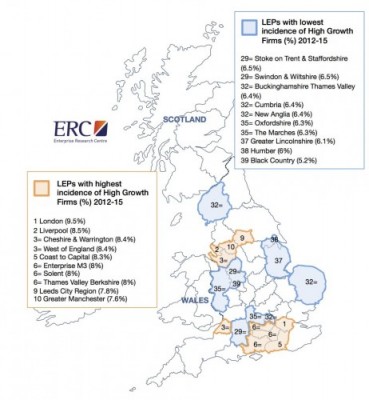 (b) Media version – the Financial Times 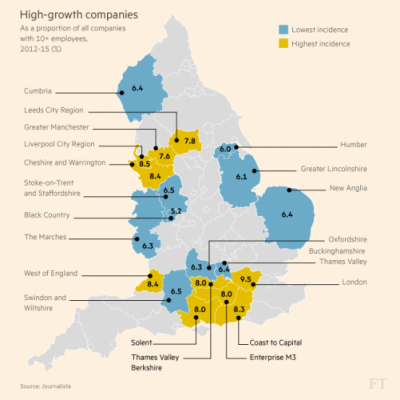 Case studies are so important for bringing a story to life. But this is even more crucial in a story that’s in danger of information-overload. A good case study helps to epitomize the story and put a human face on otherwise dry statistics. We contacted a Liverpool company, ChargePoint Technology, to get the lowdown on their success, instantly adding the personal dimension to the story. ChargePoint were also able to supply us with some fab images of their people at work and these were used by a number of publications, including The Times and The Herald.

(a) Media version – The Times 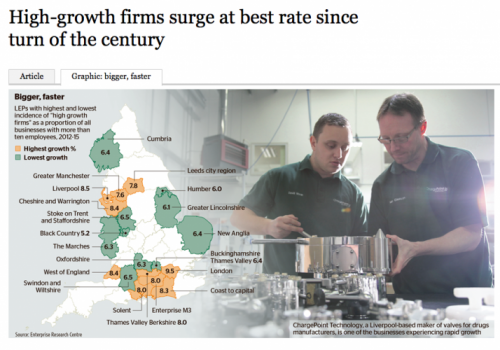 Infographics are a great way of breaking down a complex story and presenting information in a fun and shareable way – perfect for social media channels.

Our infographic focused on the ‘big number’ of 11,855 – the new total of high growth firms across the UK. But we were also keen to pull out the regional story using a simplified map and ‘office block’ graph.

This got lots of shares on Twitter – including retweets from the Department of Business, Innovation and Skills, Mail on Sunday SME reporter Vicki Owen and government Business Ambassador, Stephen Kelly.

Of course, if you’re producing a lot of content assets to accompany your story, it’s a good idea to store these in an accessible location so that journalists can quickly view and download the bits they want. We created an multimedia news release with a downloadable assets section, enabling us to send journalists a single link to all of the content rather than having to trawl through individual files or send inbox-busting attachments.