In the age of instant 'news' PRs roles have never been more important.

The United States Presidential campaign and subsequent election resurrected propaganda based reporting, better known as fake news. Many American’s were duped into thinking posts were fact-based because the manner in which news is surfaced (Facebook feeds & Tweets) and shared has changed since social media has risen to prominence in day-to-day lives.

Articles, quotes, pictures etc. are shared in an instantaneous click response regardless if it is a good, bad or simply cute. Fact-checking, corroboration and plain common sense are not employed and a fake news post can become an issue in short order.

The term ‘fake-news’ is now sharing the stage with ‘alternative facts’ aka spin. This is thanks to an interview on Meet the Press where host Chuck Todd was attempting to have Donald Trump’s counselor, Kellyanne Conway answer a question regarding crowd size at the inauguration.

Public relations and journalism are now in the cross-hairs of public opinion. PR’s have often been referred to as “spin doctors” accused of molding a story or facts to fit the narrative they need to promote. I would argue that those who engage in spin are not PR’s at all but publicists or even marketers if we have to put a label on them.

Professional public relations is tasked with very specific and basic responsibilities key amongst them for countering ‘fake news’ and alternative facts:

All of which lead to a consulting role within the C-suite as an advisor on organizational policies. A skilled PR professional helps integrate the concerns of the organization’s publics into the management decision-making process. This extends to how ‘fake news’ is addressed and countered by the organization. Professional PRs don’t deal in alternative facts, they simply deal with facts. Period.

How Does PR take on Fake News & Alternative Facts?

Most importantly PR should reinforce the basics of the profession.

- Crisis Communications plans must be updated to include potential threats and proposed responses.

- Manage Brand Reputation on an ongoing basis. This includes monitoring mentions of your brand on all social and traditional channels. Remember your reputation is about perceptions as well as actions.

- Enlist Goodwill from your public. By maintaining an active presence on your social channels your followers are more apt to come to your defense or point out when something is posted that isn’t in your usual tone.

- Be Responsive when an issue arises. We live in a world where we have seconds to capture attention and seconds to lose it.

- Build Relationships with journalists, influencers and your publics. 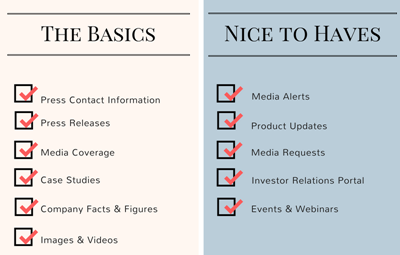 PR professionals have an obligation to help the public identify what is and what is not fact-based. There are basic elements and nice to have elements that make a newsroom/media centre a valuable tool in taking on fake news and alternative facts.

Transparency provides a pre-emptive counter-attack on these potential issue causing situations. The public trust is built in advance and the facts are available and easily accessible. Providing a newsroom/media centre gives the brand a clear voice with the media and helps the brand build its story over time.

Responsible public relations professionals provide facts, encourage a transparent relationship with the public and are responsive to questions and issues as they arise. In doing so fake news and alternative facts are revealed for what they really are and the public trust is built over time to organically combat and filter out this noise.